I can’t speak for anyone else, but it sometimes seemed that the opening day for Tūranga would never arrive. And then it did!

And what a day. You couldn’t have picked a less pleasant date, weather-wise, if you’d tried. Driving rain, occasional hail, and bitter cold – appalling weather for a library opening… and still our beloved, loyal customers came in their thousands.

I’ve pulled together all the media I could find relating to Tūranga opening in this post, along with some of the messages of support and celebration we’ve received via social media – it’s been a great time to be part of Christchurch City Libraries, feeling the aroha from people all over the city and further afield. 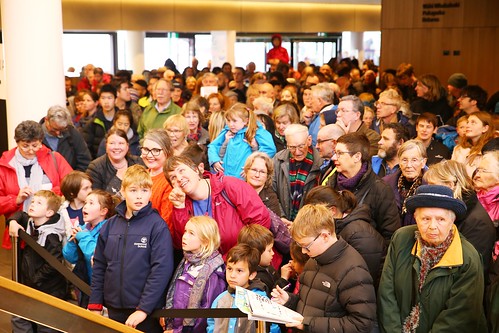 Monitoring library social media the last couple of weeks has been a) a lot busier than usual but b) a delight, as people discover Tūranga and share their joy and amazement online. Below is just a selection of the great feedback we’ve had from library lovers.

Can’t wait to visit Tūranga, the gorgeous new library – and much more! – at the heart of Ōtautahi. I love how the building evokes well-loved books on crisp (and sturdy) new shelves; an elevated storehouse; the hills on the horizon. So symbolic, and ready to work. @ChristchurchLib https://t.co/ZKw2Jsvm3S

A big, happy, wonderful day for Chch & our recovery with the opening of the beautiful Tūranga – congratulations & thank you to the team at @ChristchurchLib – this is such a glorious milestone ❤️📚❤️📚

We would like to congratulate our great friends and colleagues at Tūranga, Christchurch’s beautiful new central library, on a very successful public opening today. It’s so wonderful to have the building open! @ChristchurchLib

A few shots from the #Tūranga opening this afternoon. Our library is cooler than your library. pic.twitter.com/maUui22I17

Visited Tūranga this morning. Lovely to see old workmates so proud and happy, lots of people exploring and using. (Even a hardcore student working in one of the study rooms). Well done @ChristchurchLib pic.twitter.com/anNiwNZMTe

At Tūranga exploring our new temple to books, discovery, and learning. Also having the biggest cry I’ve had since the quakes as I’m confronted with all that we’ve lost and all that we’ve gained. #Tūranga #eqnz

‘Nobody visits libraries anymore,’ they said! Tell that to the ppl QUEUING to get into @ChristchurchLib #chchrocks pic.twitter.com/iJs3wQsWs7

It’s quite overwhelming. Lots to take in. Loads of people wandering around with smiles on their faces, soaking in the atmosphere. Bit like when MM Playground opened. V good for the soul. It has sewing machines and a recording studio!

God I love libraries so much. I am living at and for Tūranga atm! Best coffee in the city centre too I reckon

I’m finally visiting Tūranga, Christchurch’s new central library, and it is unbelievably brilliant and HEAVING WITH PEOPLE. Field of dreams, Ōtautahi. Build it and they will come.

Visiting Tūranga with the gf today and oh my god, you guys. its so cool. we’re currently chilling out on the fourth floor balcony enjoying live orchestra music(!) while we read

Outside the main media outlets, other organisations, customers and visitors have their own thoughts and reflections.

Video made by a family visiting Tūranga for the first time. Posted 16 October 2018.

If you’ve found any other news items, photos, or videos that should be included in this Tūranga roundup please let us know in the comments and we’ll add them in!

RSVP for catering and AGM apologies alice.cruickshank@ccc.govt.nz by Friday 31 August.

My intention with writing a post about attending OPEN17, this year’s LIANZA Conference was always to pick a session or two of interest and report back on them… however as often happens at these kind of events, what you think going in, and what you think coming out, are vastly different things. Some sessions I thought would fire with me didn’t, others that I didn’t expect much from resonated. You just never can tell from an abstract, I guess.

And just as important as the individual sessions is the way that themes and ideas from different ones can interact with each other in your mind, achieving a kind of cerebral synergy. So please bear with as I attempt to un-knot some of these intertwined ideas and explain their relationships to each other.

In terms of keynotes there were two that really got me thinking; Laurinda Thomas – The Dangerous Myth about librarians – and Vinh Giang – Open your mind. The appeal of the first was not so much of a surprise to me. I’ve had the opportunity to speak with Laurinda in the past about some of the issues she touched on in her presentation so I was fairly sure she and I would be on the same wavelength. We both believe that libraries have fallen into the trap of helping perpetuate narratives that do not serve our industry well. That we chronically undersell ourselves and use language that belittles us. That we need to be bold and open to change and think about ourselves in a completely different way.

Vinh Giang’s presentation was very different from this (as you would expect from a motivational speaker/magician) but in common were the ideas of changing your perception to change your reality, how the words you use (what he called “linguistic influence) can have a powerful effect, and self-belief. In many ways Laurinda’s talk was the “what that might look like in a library context” other half of Vinh’s session. He also talked about taking the blinders off and actively looking for opportunities. Advice that I took during conference myself, to great effect (more on that later).

Creating opportunities was something that came up in Hana O’Regan’s keynote too – namely how her determination to reclaim te reo created opportunities for her to learn her own history. Without this skill the Māori world would be largely closed off to her, the discovery of a Māori literary heritage (in the form of Niupepa) would not have been accessible to her and the ability to deconstruct the myths that Māori hold about themselves would have been greatly diminished. Hana spoke with great heart and it was clear that much of what she has achieved in building te reo capability within her own children is through sheer bloody-mindedness and – there’s that word again – self-belief.

Away from the keynotes some of the smaller sessions contained gold if you looked for it too. In particular I was very taken with Jane Cherry’s session, An Open Smile, which looked into the science and research behind smiling and why frontline staff should absolutely be doing it despite their many reservations – all of which were voiced to sometimes rather comical effect by Jane – including a stubborn determination to not be as friendly as “a shop”… for some reason. I found this session brought up many of the themes as discussed above, including the rather limiting “that’s not what a library does” perception still held by some.

On a personal level, I decided to be open to opportunities in a most practical fashion – despite never having bothered with it before (partly because I am deathly afraid of having awkward conversations with salespeople) – I undertook to get my conference passport stamped at all the vendor stands in the exhibition hall, and then enter the prize draw. This turned out to be quite the mission, though not too onerous, and in the process I acquired “swag” that has resulted in sunflower plants starting to grown in our garden, returning to the office bestowing gifts like the King Midas of pens, and my toddler now has a new favourite bedtime pal aka a little stuffed lion (courtesy of the generous folk at Emerald Publishing). I also entered every vendor competition I came across.

Result? I won a Fitbit that I didn’t particularly want but which I am now borderline obsessed with and a nice bottle of wine. Keep your eyes open for opportunities and amazing things (and free plonk) can happen!

NDF, or the National Digital Forum holds an annual event for the GLAMs sector (Galleries, Libraries, Archives, and Museums) that focuses on things digital. While this might sound incredibly niche it’s actually very broad – you can hear industry experts and practitioners speak on everything from data-mining to digital inclusion to social media. It’s about how we store, organise, describe, and enhance our collections and about how we present, share, and communicate them to users.

The conference itself is only two days, but workshops beforehand and other gatherings (including an AGM and newbies breakfast) help pad out the schedule. There’s a lot in there. I’ll likely write more fully on a couple of stand out sessions for me, but in the meantime here’s a selection of highlights (if anything tickles your fancy, all sessions are now on the NDF YouTube channel – lightning sessions, at only 15 minutes long are a nice length to fit in if you’re super busy)

It is with great sadness that we must announce the sudden and unfortunately, violent, passing last week of the New Brighton Library Returns bin.

The bin had not long been emptied on Friday morning when a driver apparently suffered a lack of attention and drove through the Beresford St-Marine Parade intersection and straight into the bin.

As you can see from this photo taken by a bystander the damage was significant and there was no hope for the bin which was removed later that day. Luckily nobody seems to have been seriously harmed during the accident.

Though it was taken from us very suddenly and this has come as something of a shock to everyone we can at least take comfort from the fact that only a couple of books were lost as a result of the accident and nobody (other than the bin) was injured.

It’s also worth remembering that the bin had a pretty eventful life. As far as returns bins go it had its share of excitements that include having the following items “returned” in it –

Yes. An actual shark. Presumably put there by a confused fisher person who mistook it for a refuse bin. The bin also suffered on windy days when sand would get blown into it, and apparently there was at least one fire.

Many thanks to the Returns Bin for its many years of faithful service.

New Brighton is currently without a carpark dropbox but returns are still possible using the slot next to the main entrance or via the internal returns.

Customers are advised to please park their vehicles BEFORE returning their library items.

Do you have any remembrances of the New Brighton Library Returns Bin? Please share them below.

Back by popular demand! The car park returns bin at New Brighton is up and running from today. @ChristchurchLib pic.twitter.com/fhzKy7VKVJ